Julie & Rick took my HypnoBirthing classes at Babies by the Sea Boutique located in Cardiff, CA (North County San Diego) in February 2011. They took the classes in preparation for their 2nd child's birth.

At about 4:30 am on May 2nd (3 days past my EDD), I woke up to a mild surge, but it was different from the many "practice surges" I had had in the past. I just knew today was the day my little Logan James was going to be born. The surges continued for the next two hours at about 8-12 minutes apart and I contacted my doula, Val Peterson, letting her know what was going on. At 7:00 am, I got out of bed and started getting my newly 5 year old daughter ready for school. I still was having surges every 10 minutes or so, but they were manageable and I could breath through them. My parents were in town for Logan's birth, so when they woke up I asked them to take Eden to school and go for breakfast and I would update them with changes.

After my parents left with Eden, I felt like the surges were getting a little shorter in length and they were stretching to almost 15 minutes apart. Around 10:00 am, my husband Rick and I went for a walk in the neighborhood to keep things moving...we held hands and just enjoyed the anticipation of Logan's birth. I had religiously listen to my HypnoBirthing tapes and I was determined to have a very different birth for my son than I had had for my daughter (tons of interventions).

It was a HOT day, so the walk ended a little earlier than I wanted it to. It was 11:00 am when we got home and the surges were still 10-15 minutes apart, so I laid down for about an hour nap. It was noon and at this point I was gearing up for the possibility of long labor (my daughters was about 30 hours total). I had a 1:00 pm appointment already scheduled with my UCSD midwife so we decided we might as well go and see what she had to say. Since I was 40 weeks 3 days pregnant, I was eager to hear her thoughts. Jasmine (midwife) checked me and told me I was 2-3 cm dilated and 75% effaced. She encouraged us to walk or rest, whatever my body needed, until my labor "kicked- in." So we went to the car and I felt like I should keep moving, but soon after we started driving I felt like the surges were becoming a little more intense and that a "change" might be happening, so I told Rick I wanted to go home. At 2:30 pm, shortly after returning home, I decided to start timing my surges and I put on my rainbow relaxation HypnoBirthing CD. After about an hour, I asked Rick to join me in the bedroom and to stay with me, because the surges were definitely getting more intense and I wanted him to read the balloon trip fear release script.

I could tell with the intensity increasing that I was having some fear of not being able to handle the sensations, and I wanted to nip that in the bud as soon as I could. After reading the script, Rick realized that the surges had been about five minutes apart for over an hour and he thought we should call the midwives and let them know. I didn't want to get to the birth center too early (fearful of being sent home) so I decided to get into the shower while Rick texted our doula and packed the car. The shower was soothing, but the surges were really feeling strong and intense. I worked through them on all fours with the hot water running down my back. When Rick had the car loaded (20 minutes or so later)I got out, got dressed, put my rainbow CD back on and got into the car.

The car ride to the birth center took about 15 minutes and I probably had 4-5 surges on the drive. It was now 5:30 pm and after breathing through a surge at the front desk, the nurse walked me directly to my room. No triage - yeah! The midwife checked me right away and said I was 5-6 cm and 80% effaced! I felt a huge sense of relief knowing that they weren't going to send me home and that the surges I was having were making progress. After Anna checked me, they began to fill the tub, but I didn't want to wait the 40 minutes it took to fill the tub, so I got into the shower with my birth ball. As intense as the surges were, the ball and the heat from the water brought me some relief.

My breathing during the surges became more like a moan, but that seemed to help me and I rocked through the peak of the surges. The surges felt like they were one on top of the other, but she had just checked me and said I was 5-6, so I knew I wasn't in transition yet. At this point, I was beginning to have moments of doubt about my ability to make it through. After 45 minutes in the shower, I asked my doula to check if the tub was ready and it was! I had great expectations that the tub would bring me relief, being submerged in warm water. I focused through one more surge and then got into the tub. When I first climbed in it felt wonderful, but as a surge hit, I realized I wasn't prepared for the buoyancy of the water, and I didn't know what to hold on to or how to position my body. 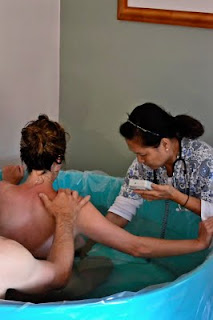 Rick got in and I immediately had another surge and I thought I might be feeling some pressure in my bottom. I'd only been in the tub for 5 minutes and I whimpered a little that I didn't think I could do it. Val asked me if I was feeling any pressure and I said "I think so" and leaped out of the tub and headed for the bed. Val went to get the midwife to check me and they announced that I was 10 cm!! I couldn't believe it! I was 5-6 cm 1 hour ago...how could I have gone from 5-6 to 10 in a little over an hour? I was in shock...I had made it... The midwives were very supportive and told me I could start "pushing" whenever I felt ready.

All of a sudden it dawned on me that I had spent too many hours preparing for labor, and practicing relaxation, but I wasn't sure how to "push," but I knew I wanted a peaceful entrance for my baby boy. A surge came with a lot of pressure and I began to breath and groan. Beth (midwife) reminded me to focus on my low tone, and I breathed, moaned, ohmed through. It only took and couple pushes and Logan's head and arm were out, but he was still in his bag of waters!! The midwives moved Logan's hand down, which allowed the waters to break and I slowly breathed Logan the rest of the way out into Rick's hands! They immediately put him on my stomach and I felt relief and intense joy! My placenta followed without difficulty and I didn't need any stitches! We did it!! 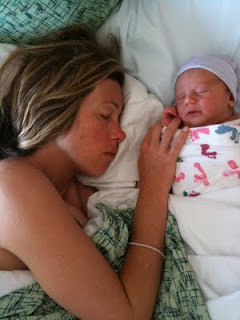 If you'd like more information about HypnoBirthing classes in San Diego, please visit Carol's website at www.AWellLivedLife.Net. If you are outside the San Diego area, please visit www.HypnoBirthing.com to find a practitioner near you.

If you'd like more information about UCSD's Birth Center, please go to: http://health.ucsd.edu/women/child/facilities/center.htm