Brooke & Matt took my HypnoBirthing classes at Babies by the Sea Boutique on Tuesday nights in May/June 2010. Here is their birth story... 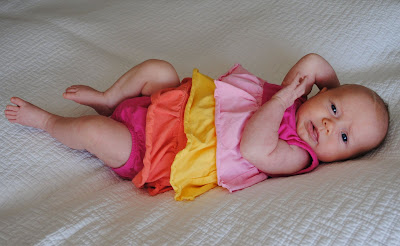 The birth story of Grace M

We had been given several different due dates during my pregnancy because I switched doctors; the earliest of which was Friday July 16th. So when I started having mild surges Saturday afternoon on July 10th I made the assumption it was just false labor and that I had been doing too much and needed to relax. Matt and I had a very mellow Saturday and at 3pm I took a two-hour nap, which I think was a Godsend considering what the next 24 hours held in store for me!

The surges continued all Saturday evening and around 9pm I got into bed to watch a movie and try to relax. At this point, the surges felt like typical menstrual cramps; somewhat uncomfortable but not painful. I downloaded an app on my iPhone and started to time the surges (yes, there is an app for that!!) because I knew from class the difference between false labor and real labor was whether the surges were coming in a consistent time frame for at least an hour. The surges were kind of all over the place – it would go from 10 minutes apart to six minutes back to 10 minutes, etc. This further confirmed my thinking it was just false labor. Matt came up to bed around 11pm and was surprised to find me awake and timing surges. I told him I thought it was still just false labor and we went to bed. I was able to sleep, or at least rest, between the surges until around 3am at which point I was just awake and trying to rest and remain calm since I was starting to think we had a long day ahead of us. I was listening to the rainbow relaxation CD on my iPod this entire time, which helped me stay focused on keeping my body limp and relaxed.

Around 6am on Sunday morning I could no longer stay in bed and moved to sitting on the toilet, which was comfortable and helped keep my pelvis open. This is when we called my sister-in-law Kelly (who is a midwife), and she confirmed that since the surges had been coming since Saturday afternoon, I was definitely in labor. She booked a ticket on the next flight out of San Francisco and was landing in San Diego at 10:20am. She was originally scheduled to fly down later in the week to act as our doula at the birth.

Matt drew a bath for me and I labored in the tub for about an hour while he got the bags and everything ready to go to the hospital. Around 8am we called the doctor’s office and as we expected my doctor was still on vacation so his backup called us back. She said if the pain was too much we could head to the hospital so I could receive an epidural, but if not to wait until the surges were about 4 minutes apart for an hour. The surges were fairly intense at this point, but I kept breathing through them and it really wasn’t too bad. It was actually quite an exciting time because we knew our baby was coming and everything we had been preparing for was happening!

As far as we could tell, when we called the doctor the surges were ranging from 4-7 minutes apart. We had a really hard time timing the surges because they start off mild and then get more intense and then get mild again before stopping. This being said, it was hard for me to tell exactly when they were starting and stopping which made timing them very difficult.

It happened that we were ready to go to the hospital at the same time my sister-in-law was landing at the airport. Rather than her having to take a cab all the way to Encinitas we decided to pick her up at the airport and then head straight to the hospital. Like I said before, our thinking had been we didn’t want to get to the hospital too early so at the time it just made sense that we’d pick her up. And since I had been laboring on the couch, the front seat of the car didn’t seem too different. ;) We live in the Kearny Mesa area so I ended up laboring in the car for about 40 minutes.

We picked up my sister-in-law at the San Diego airport at 10:20am and headed up 5 North to Scripps Encinitas hospital. During the drive, I had the front seat fully reclined and was lying on my side which felt better than on my back. My feet were up on the dash and I had the window half way down because the fresh air felt so good. I’m sure people driving by thought it was a strange scene! I was listening to rainbow relaxation on my iPod this whole time and was continuing to breath through the surges. My instincts told me I was in pretty intense labor at this point but still the surges were manageable as they don’t last that long. And the breaks between them, albeit short, were still wonderful! When we pulled up to the hospital, Matt actually asked if I had been having surges during the car ride because I had been lying there with my eyes closed and not making any noise! I kind of chuckled and said, “Yes”!

We checked into the hospital and it took some time to fill out the paperwork, etc. I declined the wheel chair they offered me because it felt much better to stand during the surges. As we got to our labor and delivery room around 11:30am I was starting to feel intense pressure like I was nearly ready to start pushing! The nurse checked me upon arrival and I was 8cm! Considering this was my first birth I didn’t really know what to expect so we were all really excited with this news! The nurse gave me a hospital gown but I had brought a robe from home that I preferred to wear which she was fine with. Once I had changed I sat on the birth ball and leaned against the hospital bed while the nurses did all the initial tests/monitoring to me. The fetal heart and contraction monitors were attached around my stomach while I sat on the birth ball. The plan had been to do the initial monitoring for 20 minutes and then have everything removed so I could move around (this never happened since things moved along so quickly). At 37 weeks I had tested positive for Group B Strep. I had been doing some natural at-home remedies, but still had to get a dose of antibiotics when we arrived at the hospital. They gave me the antibiotics while they were doing all the other initial monitoring things.

We requested the nurse check me again a little before noon because I was feeling such intense pressure and felt ready to start pushing. At this point, I was now standing next to the hospital bed doing the modified downward dog position with my hands on the bed because I could no longer stay seated on the birth ball. Once the nurse checked me again and confirmed I was to 10cm I moved onto the bed to start pushing. It was noon when I started pushing.

Right away the doctor confirmed she could see the baby’s head, and I was trying to push the head to pass under my pubic bone. After about 20 minutes of pushing and between surges the doctor checked me and then asked us when our last ultrasound had been. Both Matt and I were so confused and told her it was at 19 weeks when we had the anatomy ultrasound. After this she told that was not the baby’s head we were seeing and it was her bottom! We were all in disbelief as my doctor had confirmed at my 37-week appointment the baby was head down, and then again at my 38-week appointment the nurse practitioner had felt my stomach (because my doctor was on vacation) and also said the baby was head down. The doctor immediately suggested a c-section and we asked for a few minutes to discuss it privately. As my sister-in-law is a midwife and has delivered breech babies, we did consider trying to still do a vaginal birth, but in the end we decided to be conservative and agreed to the c-section.

Grace was in the Frank breech position, which is where her legs were straight up so her feet were at the top of my stomach and were kicking in the same area she would have been had she been head down. And then since her head and bottom are both firm, it did feel like it was her bottom at the top of my stomach. Regardless, it was disappointing her breech position hadn’t been discovered earlier so we could try some things in order for her to move positions, but in the end if she hadn’t moved we probably would have scheduled a c-section. I’m glad this didn’t happen because as crazy as it sounds, I am glad I got to experience labor as it was such an amazing experience; emotionally as well as physically. So after all of this Gracie was born at 1:05pm via c-section! She came out alert, healthy, and crying loudly!

I don’t know how I remembered, but after the c-section they were getting ready to stitch me back up and I recalled a section in Ina May’s Guide to Childbirth book that discussed the importance of having the uterus sutured in two layers rather than the one layer method which is currently popular in the situation of a c-section. I asked the doctor if she was going to sew me up in one or two layers, and after telling me they routinely do one layer, she asked if I would prefer her to do two layers. I told her I would. Per Ina May’s book, this will help the uterus stay stronger and increase the likelihood of having a successful VBAC in the future.

The doctor and nurses were all so wonderful, and we were very happy with Scripps Encinitas hospital all around. They were completely supportive of everything we wanted and were very familiar with HypnoBirthing. Everything with the baby was in-room so Grace was never out of my sight. They even brought her to me while I was still on the operating table after the c-section. I really appreciated this.

Thank you so much for sharing your story! I think it's so important for people to realize that HypnoBirthing helps in whatever situation comes up during your birth experience & that it's not "just" for natural births. It can be extremely helpful during c-sections as well.

Congratulations on the birth of baby Grace! Continue to enjoy your babymoon!