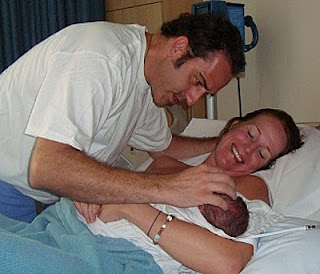 Laura Fairchild, the co-owner of Babies by the Sea Boutique, took my Tuesday night HypnoBirthing classes with her partner, Eric, in April 2009. Here is the story of their son's birth:
Linda Goldsmith, my doula, did a birth timeline for me that I would like to share. She documents Rion’s birth story so well. What I would like to add is how much HypnoBirthing helped me so I will explain a little before sharing Linda’s timeline. Once my surges started, I listened to the rainbow relaxation CD and I was very calm. I had listened to the CD before bed during the course and for the month after the course prior to the birth. When in labor, I never felt nervous or scared. I knew that everything that was happening was supposed to happen and was normal. I felt like I really went inside myself and was able to focus on my breathing techniques and visualization exercises. No one else really existed outside of me. My partner, having taken the class with me, was also very calm and knew what to expect and how to support me throughout the labor. Linda, my doula, was also well versed in HypnoBirthing.

We labored at my house for some time then went to the hospital. When we arrived at the hospital we put the CD in and continued our practices. There wasn’t ever a time the thought of drugs or an intervention entered my mind. I was totally at ease. I did feel pain but my body surrendered to it and it did not make me tense or uncomfortable. It was so pure and real and after the delivery I was very awake and clear. I truly experienced and felt every moment of the birthing process and best of all my body did exactly what it was supposed to do. Without the HyponoBirthing I feel I would have been nervous, unfocused, anxious, scared, frustrated, and in uncomfortable pain. I am very proud of our birth story.

Here is Rion’s birth story told from my doula’s point of view:

3:30 a.m. Laura had a spontaneous rupture of membranes (SROM) in the middle of the night.

7:20 a.m. She called me to tell me the news. She said she was still leaking a lot of water, soaking six pads thus far. I told her that she should probably reposition baby so that baby was better lined up for exit and also acting as a cork for all that gushing fluid. I suggested she lay upside down on a decline. She did it once and it didn’t really change anything. She did it a 2nd time and it seemed to work. No more tons of water coming out.

9:30 a.m. I arrived. Laura was standing and leaning on her bed. She was breathing very well and talkative, so I knew she was in early labor on her way to active labor. Her surges were every 5 minutes and 20 seconds long.

9:35 a.m. Eric arrived and immediately jumped into to a supportive, helpful role.

9:45 a.m. Laura’s labor intensified. Her labor support team was now there, so this did not surprise me. I sent a text message to Dr. Biter letting him know what was going on as he was in a business meeting in downtown San Diego. I had Laura rock her hips in a figure eight to help get baby in a good position and as a coping technique. I showed Eric the double hip squeeze and he did that while I massaged her scalp and applied cold washcloths to her body that was heating up perfectly. Laura continued to labor very well and her journey was intensifying.

10:40 a.m. Dr. Biter called me and offered to come to Laura’s home to do a pelvic check. I thought it was a great idea and a very kind offer. Laura continued to labor effectively and with great confidence, staying calm and relaxed and focusing on her hip movement and breathing.

11:15 a.m. Dr. Biter did a pelvic exam and she was 7 – 8 cm dilated, a little more on one side than the other. We suggested that she do some lunges on the low table, which she did for about 20 minutes. Dr. Biter went to go change clothes and said he’d meet us at the hospital when we were ready to go.

11:35 a.m. Laura’s labor was getting stronger and stronger. I really felt like it was time to go. I suggested that to Laura and she agreed.

11:40 a.m. We left for the hospital. Laura’s two sister and mothers were following along.

11:50 a.m. We arrived at the hospital. Laura was still surging very well. The plan was to get a pelvic exam to get officially admitted, then go from there based on the information we were given. She did her standing and leaning against the hospital bed. Jenny was taking some beautiful labor shots.

12:15 p.m. Dr. Biter did the pelvic exam. He said she had “a little more work to do”. I suggested the shower and she agreed. She was in there for 30 minutes. Dr. Biter went and got her a popsicle. Eric and I supported her while she was in the shower. Eric still had her hips and I sprayed the water all over her body and gave her words of encouragement.

12:45 p.m. Dr. Biter suggested she get out of the shower which she did. She went to the bed and began pushing. She only had to push for one hour with a first baby. Her two sisters and her mom were a great cheer squad for her!

1:48 p.m. Calm Baby Rion was born! He was just perfect! He had a very peaceful first hour of life, just resting on mama’s breast, making eye contact with her, hearing her heartbeat, licking at her nipple, and falling asleep. An hour later he breastfed.

2:50 p.m. Everything was perfect and it was time for the family to be alone with their newest, most precious member. I took my leave.


DOULA’S NOTES
This was a wonderful birth! Laura did a great job of staying calm and relaxed. Eric did a great job of supporting her during the labor. Dr. Biter was so kind and gentle. Her family was over the moon with pride at what Laura was accomplishing before their very eyes.

I knew Laura would do well. She is a very focused individual and very loving and caring mother who I knew wanted the best journey for her baby’s birth. She gave that to him on his birth day. What a gift! It was an honor to be a part of it all.

Thank you, Laura, for sharing your birth story! Thanks to Linda Goldsmith for such a great overview of her birth!
Just a little interesting tidbit--Laura met Dr. Biter (who co-owns Babies the the Sea Boutique with her) during her pregnancy & it was at this time that Babies by the Sea Boutique was created!
http://www.awelllivedlife.net/
http://www.awelllivedlife.blogspot.com/
Posted by About Carol at 9:32 PM